The most exciting editorial dog photography project we’ve worked on to date came out in the mail a week ago while I was in Chicago. The September/October issue of Journey magazine, AAA Travel’s bi-monthly membership publication. Yours-truly did the photography in Seattle for the cover feature article, about traveling in the Pacific Northwest with your dog. This project was incredibly fun. 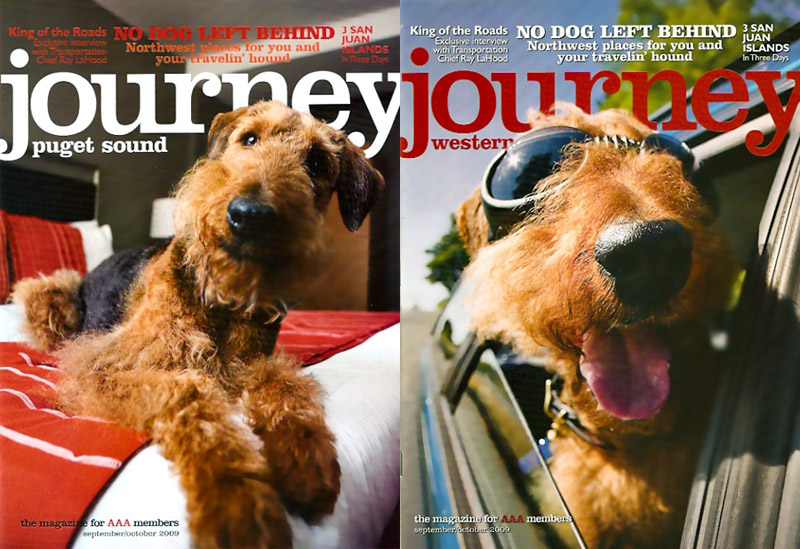 What you see above are scanned copies of the covers. The online images were too small to do justice to the blog, so I had our studio manager Christina scan them.

There are two magazines: Puget Sound Journey which is distributed in Washington, and Western Journey, which is distributed in Idaho, as I understand it. Both magazines have different content, so we shot for both of them. The distribution for both mags combined is nearly 570,000 homes, which is apparently the biggest distribution of any magazine in the state! I still can’t believe the numbers of emails I have gotten on this, from the most random people (an old friend of my dad’s in Port Townsend, a former fellow dog walker from *years* ago, multiple clients I haven’t seen in eons, NEW clients, a neighbor of my mom’s, etc, etc). The editors warned me to ‘be ready’ when it came out and boy they were right! Whoopee! 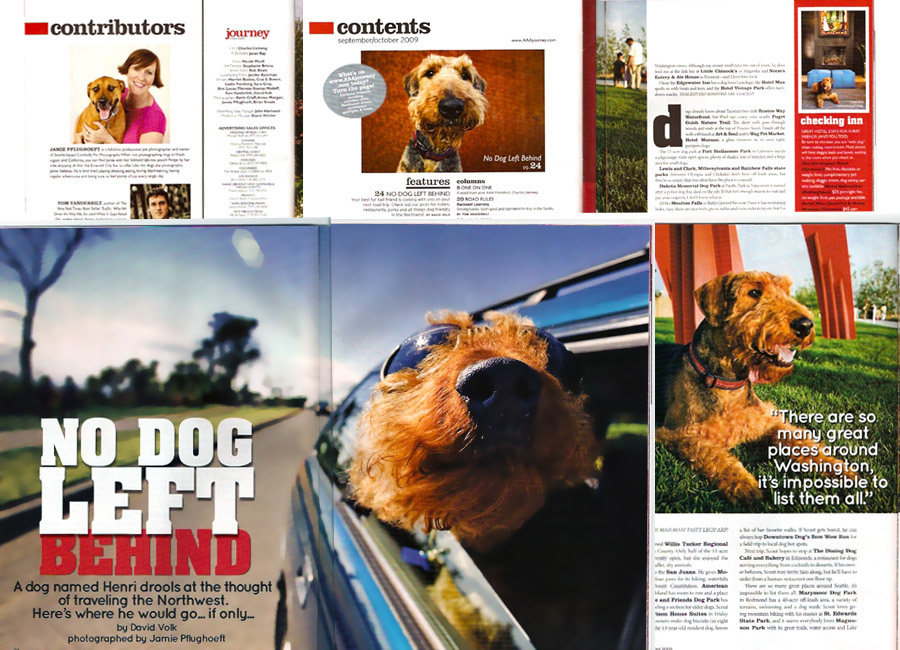 What is so exciting about this project is that they didn’t just come to me to buy an image for the cover, and/or a few for the article, they came to me to do an assignment shoot, which involved me picking the best model for the job, suggesting the best locations for the story, and infusing my own creative ideas into the project. These things are incredibly rare for any editorial shoot.

PLUS they gave me a contributor’s bio, and I swear it doesn’t get any better than that! I so love this article! PLUS, it’s literally overflowing with suggestions on places to go and things to do with your dog. I swear it’s the most content-rich dog article I’ve ever seen. AND, much of it is spoken in Henri’s words, which is so adorable, and somehow they managed to pull it off without sounding cheesy.

Although the art director wanted a golden retriever or large mutt for the project, I knew right away we needed to use Henri, the Airedale Terrier who usually just goes by ‘H’.

I could easily visualize him in this article so I pushed him and he sold.

For locations I suggested Norm’s Eatery in Fremont, the Magnolia bluffs, and Kerry Park on Queen Anne. They had already lined up a shoot at Hotel Max downtown (love Hotel Max!), which is where the Puget Sound Journey cover shot was taken.

We used a few shots of H from last summer at the OSP, and the rest were taken specifically for the article. The art director wanted a shot with downtown and the Space Needle in the background (not as easy as it sounds folks) for one of the covers, but I had my own ideas.

I wanted a shot of H with his head hanging out a car window, with the wind in his hair and the blue sky behind him, on his own big adventure. I was determined. I gave them all of the shots they asked for and was thrilled when they told me they were going with that shot for one of the covers and the inside spread!

Stephanie Bricca the art director, and Nicole Meoli the editor-in-chief were both a joy to work with (both dog owners so it’s no surprise) and the entire experience will go down as one of the most rewarding of my career. Plus the fact that it followed fellow Seattle photographer Chase Jarvis‘ cover feature in the last Journey issue just makes it that much sweeter.

OH, AND, what makes this so much cooler than being involved with any old publication is that I am a member of AAA, receive Journey in the mail, and read it cover to cover every month. When I had Stephanie Bricca on the phone the first time I was literally in the process of reading Chase Jarvis’ article in the last issue! I positively love to travel and this magazine couldn’t be a better fit for me, my lifestyle and, I like to think, my photography.

If you don’t already have a copy and want one, there is only one way to get one and that is to become a AAA member! I don’t even have any copies to spare myself, but it’s all good as my family members are all members already.  My sister left me a voicemail after receiving the article “I had no idea you did that Journey shoot, but when I got the mag in the mail today I knew before even opening the magazine the cover shot was your image!”. Ah, the best compliment I could ever get. 🙂

Thanks for letting me gloat everyone! Hope you are having a great labor day!